427 corpses of Ukrainians dug up in Izyum – National Police 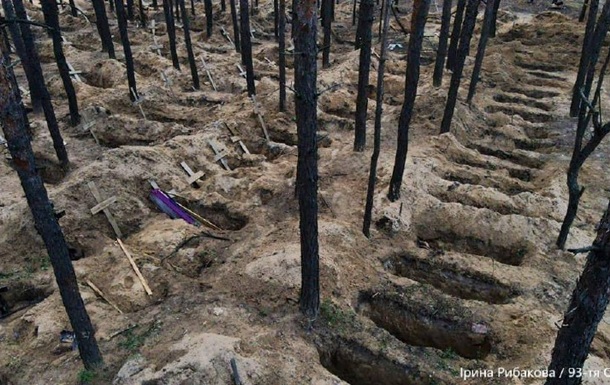 Among them – 202 women, 189 men and five children. 11 bodies were so mutilated that it was impossible to determine their gender.

427 bodies of dead and tortured Ukrainians have been found in the Kharkiv region. This was announced on September 23 by the First Deputy Head of the Main Investigation Department of the National Police Sergei Panteleev at a briefing at the Military Media Center.

Sergei Panteleev emphasized that police work in the occupied territories is focused on documenting and investigating war crimes committed by Russian military personnel.

“Since the beginning of Russia’s massive invasion of Ukraine, the investigators of the National Police have registered more than 34,000 criminal proceedings on the facts of war crimes. A significant part of the police recorded during the work on the territory of Kyiv, Zhytomyr , Sumy and Chernihiv regions were freed from the enemy,” said Panteleev.

According to the first deputy head of the Main Investigation Department, the police focused their efforts on the exercise, collection and settlement of war crimes in the Kharkiv region:

“Among the bodies exhumed from the mass grave in Izyum were 202 women, 189 men and five children. 11 bodies were mutilated so that it was impossible to determine their gender. Also, 21 bodies of our soldiers were found in a mass grave in the same city. Most of the bodies discovered on visual examination showed signs of violent death,” the police said.

Sergey Panteleev said that the exact cause of death of each citizen will be established as a result of further research:

“In total, the police found more than 460 bodies in the occupied territory of the Kharkiv region. More than a third of the bodies found have been identified. The work of identifying our citizens does not stop. Sent for in thorough forensic examinations. More than a thousand different studies are scheduled, which will help to determine the causes of death and possible killers.”

In the liberated settlements of the region, investigative and operational groups of the National Police continue to work. According to Sergei Panteleev, the work is carried out continuously and systematically to document all the atrocities committed by the Russian military. Investigators have conducted more than 1.5 thousand inspections in places where war crimes were committed.

In addition, during work in the liberated territories of the Kharkiv region, the police discovered and documented 18 places where the Russians illegally detained and tortured our citizens – in the cities of Kupyansk, Izyum, Balakleya, Volchansk, the villages of Kazachya Lopan , Shevchenkovo, Ogirtsy.

Sergey Panteleev also said that law enforcement officials are taking stabilization measures in the occupied territories of the Kharkiv region, where the participation of more than 2 thousand people in cooperation activities has been proven. The information, if confirmed, is transferred to the SBU for further investigation.

Also, the National Police has developed a register of Russian military personnel and members of illegal armed groups of the so-called “LDNR”, who are in the occupied territories of the Kharkiv region and can make war crimes. Information has already been entered about more than a thousand people.

The First Deputy Head of the Main Investigation Department announced the results of documenting the facts of cooperation activities within the state:

Earlier, the deputy mayor of Izyum, Vladimir Matsokin, said that the number of victims of the occupation of the civilian population of Izyum may exceed a thousand people.

Previous articleAni Lorak for the first time expressed his position on the war in Ukraine
Next articleAfter the death of Elizabeth II, designers created a collection of mourning clothes