DINI chief lawyer: “Henry Shimabukuro is not part of the institution” 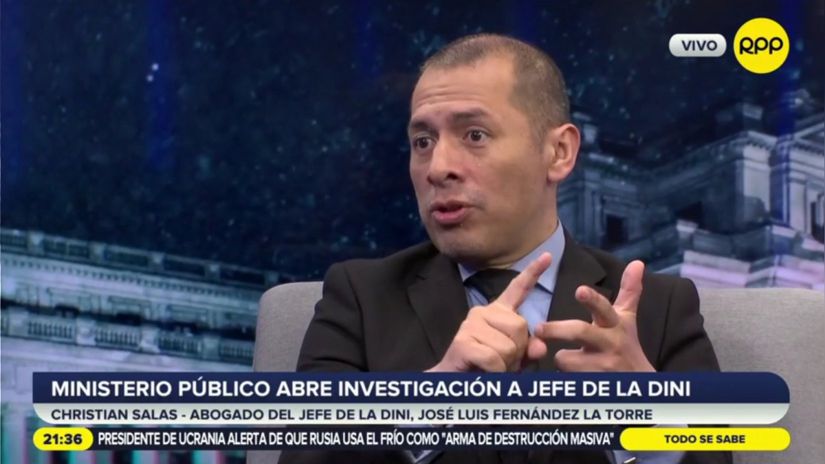 Christian Salas, a former anti-corruption attorney, confirmed that he is the new lawyer for DINI head José Luis Fernandez La Torre. In this sense, he indicated that his now sponsored one was included in the deal known as Petroperú. However, he clarified that he is not accused of illegally hiring official Hugo Chavez, but that he is being investigated for statements by an effective collaborator.

“He is included because of a statement by a collaborator who says that he, as the head of DINI, would meet with the president, with Beder Camacho, with Henry Shimabukuro, in order to organize, remove the president from the violations, from the crimes allegedly committed in Petropera. This fact, Mr. Fernandez, since last week, gives his statement to the prosecutor’s office, denying that this meeting existed,” he said in the program Everything is known RPP.

Christian Salas pointed out that it was proved that Henry Shimabukuro is not a member of DINI, and said institution has provided the Presidential Administration and the Court of Accounts with information on the situation of said person.

“Information that the leader Dini This has been confirmed, and I can only give you one piece of information: Mr. Fernandez saw Shimabukuro after he was introduced by the President of the Republic himself last December. Moreover, he participated in several official meetings with high-ranking police officers, while the top leadership of DINI posed as an adviser to the president, ”he said.

The lawyer reiterated that they would demonstrate that the said meeting between his patronage and the other said characters never took place.

“Mr. Fernandez La Torre is accepted without further support, without participation in this alleged criminal organization proposed by the prosecutor’s office. said.

Violations in the Shimabukuro case

Comptroller General of the Republic produced a report that would show serious breaches in Henry Shimabukuro’s contract with the National Intelligence Agency (DINI). The document of such an agreement has neither a signature nor a stamp, it is only on the form, and it is not known how much his salary is.

In a report published by the Sunday newspaper end pointit became known that the work of Shimabukuro began in December 2021. However, this April control he requested a contract document from the Secretariat of the President’s Office, in which the mentioned information was omitted.

Previous article
Waste reduction. the French adhere to the principle despite the short-term practice, according to the survey
Next article
United States. A Walmart supermarket manager shot six people before killing himself