Transparency president on early elections: ‘This measure must be taken as soon as possible’ 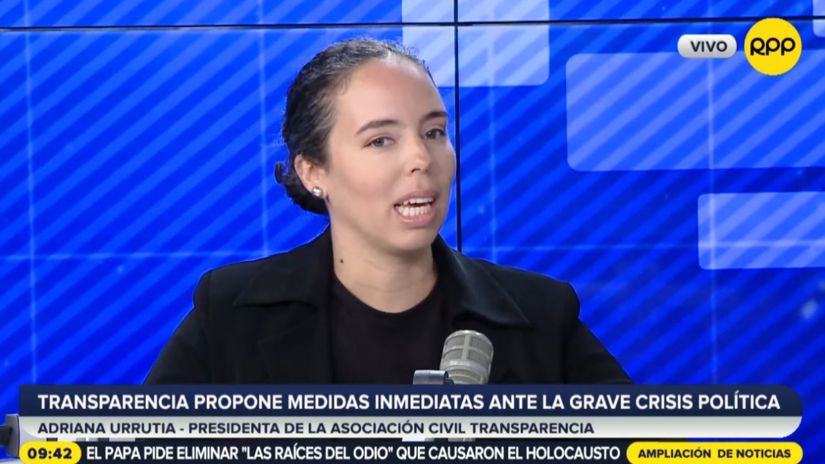 President of the Transparency Civil Association, Adriana Urrutia, explained the proposals of his organization, which are designed to offer a way out of the political crisis that the country is going through. In its statement, Transparency offered a reading of the current situation and provided guidance to follow.

Urrutia specified that the first point concerns the possibility of holding early general elections. According to the president of Transparency, this is a measure that needs to be taken as soon as possible.

“The first sentence is a message to the parliament, and I would like to address here the congressmen of the republic, who are going to meet in plenary session to determine the date for moving forward with the general election. At the moment, the country is living, it is necessary to take this measure as soon as possible. And we believe that elections should be held this year. As various experts have pointed out, this is feasible, but it requires a political decision to be made by the parliament,” he said.

“Parliament has tried to develop a set of rules that are designed to change the way authorities are elected for a process that is coming and we believe that this will affect the correct functioning of the systemand the trust citizens can have in their institutions,” he added.

Stop the disproportionate use of force

Secondly, urrutia The second point of his proposal, he considered the suppression of the disproportionate use of force in the repression of protesters by the state.

“The second point of the communiqué that we raise is that the government must stop the disproportionate use of force.. Independent investigations are required to find out what happened in recent days, weeks, months, to explain the conditions under which the dead compatriots died. In addition, the national government must take political responsibility for what happened. This means that after these clarifications, it is determined who is responsible for what happened,” he said.

Finally, he believed that participation in the dialogue was a necessary requirement and that both the executive and the legislature should do their part to ensure its effectiveness.

“We ask to create mechanisms for dialogue. I know that this word is used a lot, that it doesn’t necessarily have a real meaning, but it means that all actors agree that the country wants to get out of this crisis. For this, the various forces that are mobilizing must agree on what we must say, and the executive and legislative branches must make their contribution,” he concluded.