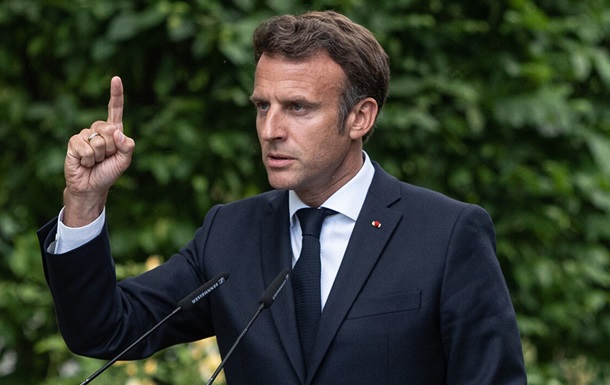 The French leader believes that the head of the ruling regime of the Russian Federation should be held responsible for the war in Ukraine.

Russia made a big mistake when it invaded Ukraine. In addition, Russian attacks on civilian infrastructure are war crimes, French President Emmanuel Macron said in an interview with CBS News.

“I think they made a big mistake. First, not respecting international law and violating all the principles they signed up for is fatal for their authority. And second, because they probably made a lot of mistakes in assessment of their capabilities and capabilities of Ukraine “, he noted.

The French leader also answered the question of whether he should be held accountable for these crimes.

“We must collect all evidence of war crimes. And this is what we are doing by sending police officers and experts to Ukraine … We must launch all legal initiatives. Therefore, the my answer is yes,” stressed the French leader.

However, Macron added that he was in favor of direct contact with Putin.

“I always maintain regular discussions and direct contact with President Putin, because I believe that the best way to continue contact is to maintain this direct channel. Isolation is the worst thing, especially for such a leader,” he explained.

Support for Ukraine from Europe and the United States is important.

“It is clear that Russia, and especially President Putin, has decided to ride at least on energy and food, which creates shortages, instability and inflation. And I think his bet is war fatigue and the fatigue penalties,” the president said. France.

Macron said he sees no military option to end the war in Ukraine.

“I think it is important to convey the message that it is up to the Ukrainians to decide, that the only way to find a solution is through negotiations,” he added.

Earlier, Macron said the West should consider how to meet Russia’s demand for security guarantees if President Vladimir Putin agrees to negotiations to end the war in Ukraine.

At the same time, he also said that the world should help Ukraine militarily. In particular, Paris will also provide Kyiv with “additional weapons”, but not one that would allow “an attack on the Russian Federation on its territory.”

Previous article
Chinese horoscope. What to expect in the year of the Black Water Rabbit
Next article
The house of the controversial blogger was bombed with Molotov cocktails

This type of symptom should not be normalized and needs to...