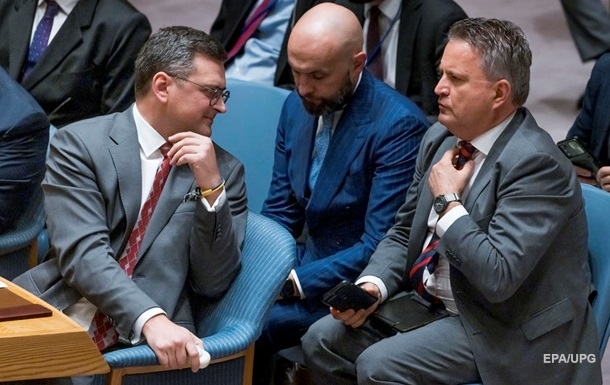 The high-level meetings in New York are taking place against the backdrop of another escalation sparked by Putin’s remarks about pseudo-referendums and mobilization.

“I noticed that the Russian diplomats fled as well as the Russian soldiers,” said Dmitry Kuleba, drawing parallels with the retreat of the Russian army during a counteroffensive by Ukrainian forces in the Kharkiv region.

It should be noted that Lavrov arrived at the meeting of the Security Council, which focused on the situation in Ukraine, with an hour and a half late and only for his speech. In his speech, he, in particular, said that “Ukraine has finally become a totalitarian state of a neo-Nazi type.”

Also in his speech, he began to repeat Russian narratives about “lawlessness” and “crimes” of the so-called “Kyiv Regime”, which, according to him, remain possible due to “patronage” from United States and its allies. .

“The United States and its allies, with the complicity of international human rights institutions, have been systematically covering up the crimes of the Kyiv regime for eight years, basing their policy towards Zelensky on the well-known principle of America: he, of course. , is a son of a dog, but he is our son of a bitch,” he said. Lavrov in New York.

Later, Kuleba addressed a UN Security Council meeting, saying that the meeting room had seen many heated discussions and crises during its existence, but “the amount of lies today from Russian diplomats is unprecedented.”

“In fact, the only thing that deserves a reaction in the Russian speech today, in all this flow of lies, is the unacceptable language used by the representative of Russia in relation to the president of a foreign country, the president of Ukraine,” the Ukrainian minister stressed.

Earlier, Kuleba, when asked how he would get along with Lavrov, joked that he would observe a “safe social distance.”

Recall that the Ministry of Justice of Ukraine at the 77th session of the UN General Assembly is discussing the creation of an international compensation mechanism.