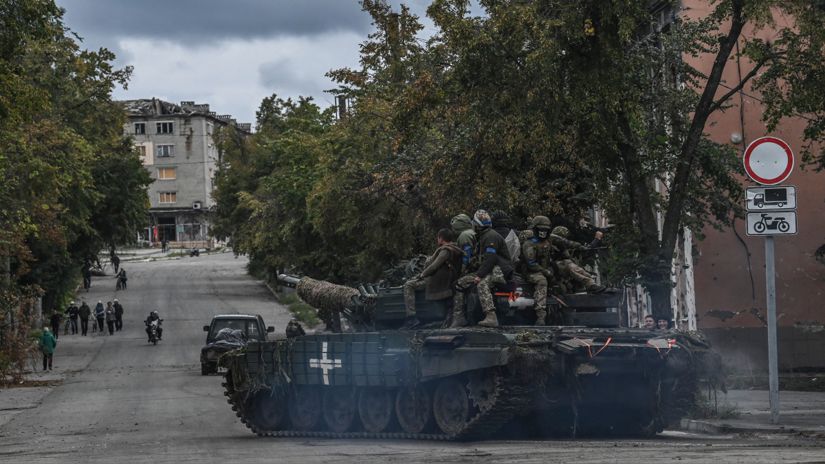 Ukraine has launched an investigation into alleged war crimes in the liberated territories of the eastern Kharkiv region, committed while they were under Russian occupation, while it is steeped in the arrest of pro-Russian collaborators in rebuilt cities.

He explained that his agency has created 23 mobile groups of prosecutors, policemen, sappers, representatives of the SBU and other specialists, as well as five “thematic groups” that will investigate “acts of torture of local residents and search for barracks or command posts.” posts of the Russian Federation” on Kharkiv.

He emphasized that the task of these groups is to collect “all possible evidence and document it according to international standards” so that they can be used in Ukrainian and international courts.

The task is enormous, as the forces Ukraine Since September 6, about 8,500 square kilometers, 388 settlements and 150,000 people have been liberated in the eastern region, Deputy Defense Minister Hanna Malyar said the day before.

Head of the regional prosecutor’s office KharkivAlexander Filchakov noted that six bodies had already been recovered from the 9th to the 11th in the villages of Grakovo and Zheleznodorozhny.

According to him, these people were “killed” by the Russian military and buried by local residents. He assured that “traces of torture were found on the bodies.”

In addition, he added, employees of the Izyum city prosecutor’s office, together with police investigators, found “buried citizens killed by Russian soldiers” in Balakliya.

Arrests of collaborators and traitors

In turn, the Ukrainian authorities and forces began the task of “stabilizing” the territories of Ukraine. Kharkiv recovered.

These measures include the arrest of pro-Russian “traitors” and “collaborators”.

“The Security Service (SBU) continues large-scale stabilization measures in the frontline areas of the eastern part of Ukraine. Only in the last days after the de-occupation of the district of the city of Kharkiv16 local collaborators have been identified and detained,” the ministry said on Thursday in its Telegram channel.

He explained that SBU officers “carried out an exhaustive check of about 7,000 people in the liberated settlements” of the region.

State Bureau of Investigation Ukraine (DBR) already reported on the 9th that “conscientious processing of information about people who collaborated with the aggressors during the temporary occupation” began in Balakliya.

He recalled that the charge of suspicion of collaborationism, provided for by the Criminal Code, provides for punishment of up to 10 years in prison.

The official representative of the Russian Foreign Ministry, Maria Zayarova, said today that Kyiv’s “filtration” measures in the liberated territories are connected with the “murder” of civilians by “special services and neo-Nazi armed groups Ukraine”.

He assures that “thousands” of people, “civilians” are going through these filtration measures.

The spokeswoman made these statements when Ukrainian non-governmental organizations such as the Human Rights Media Initiative and Yale University, in cooperation with the US State Department, accused Russia of establishing between 18 and 21 filtration camps in Russian-controlled Ukrainian territories.

Moscow has always denied these practices, but Ukrainian citizens who have gone through some of them have confirmed their existence to NGOs and the media, including Efe.

Offensive passes to Dontesk and Luhansk

The military representative of the self-proclaimed Lugansk People’s Republic, Andriy Marochko, acknowledged yesterday that the situation in the region is “really difficult” as Ukrainians “arrived in some areas very close to the borders of the region and are already about 10 kilometers from the line of contact.”

At the moment, the fighting is concentrated around Liman, about 54 kilometers from the city of Izyum, in the Kharkiv region, which Ukraine recaptured during a counteroffensive in the north-east of the country.

Liman is strategically important, as it is located a few kilometers from the border with Lugansk.

(As reported by EFE)

“Espacio Vital”: Dr. Gabriela Calderón Valencia, breast and soft tissue oncology surgeon, explained that a young breast cancer group is called when a woman is younger than 40 years old. He clarified that in developed countries, the prevalence is between 5% and 7% among people under 40 years old, and in undeveloped countries – 20%. This may be due to the lack of timely assistance and the lack of proper diagnosis. He pointed out that many times young patients arrive with symptoms but they are ignored and the attending physician must be very careful with a group of young women with breast cancer. They should go to the primary level, and if they don’t find a solution, they should go to the second level of care.

The Memphis Police Department announced Friday that it has fired a...
World