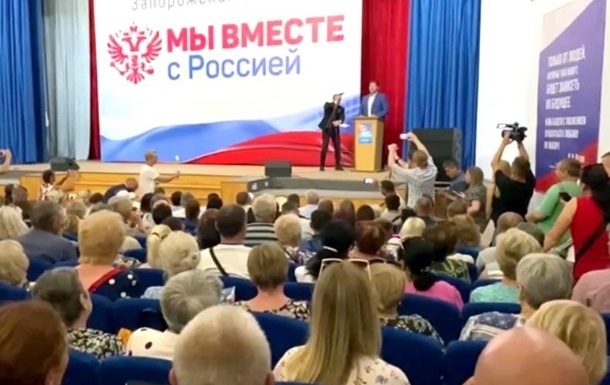 The protégés of the Kremlin have not yet decided on the date of the vote for “joining” the Russian Federation, because “certain conditions are required.”

The “authorities” of the Zaporozhye region, appointed by the Russian invaders, cannot yet name the date for the so-called “referendum” in the region.

This was said by the so-called “member of the main administrative council” of the region, Vladimir Rogov, the Russian pro-government publication RIA Novosti reported on Thursday, August 11.

“The date will be determined as soon as we understand that security, freedom of expression and transparency of results are guaranteed in the region,” he said.

According to him, the date of the referendum will be announced when “all these three principles are implemented.”

Recall, the deputy of the council of the Kherson region, advisor to the head of the Kherson OVA Sergey Khlan reported that the Russians stopped mentioning September 11 as the date of the pseudo-referendum in the Kherson region. A similar thesis was expressed by experts from the American Institute for the Study of War (ISW), but they emphasized that even without a referendum, the damage caused by the Russian occupation of the southern and eastern regions of Ukraine would be extremely destructive. .

Earlier, the Secretary of the National Security and Defense Council of Ukraine, Oleksiy Danilov, said that the occupying authorities could not form “administrative bodies” in the temporarily occupied territories of Ukraine due to a lack of collaborators.

In addition, partisans warn the residents of Melitopol that participation in a pseudo-referendum can be life-threatening.

Previous article
Taiwan rejects reunification with China
Next article
The sands were completely destroyed, but the fire of the enemy did not subside – social networks