In Egypt, the mummy of the “golden boy” is explored 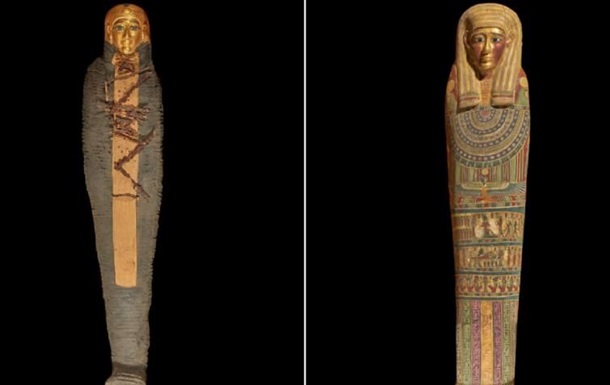 The mummy was found in the cemetery of Nag el-Ghassay in Egypt. The child was buried in two coffins.

In Egypt, they found the mummy of a boy with 49 amulets decorated with different images, a tongue in his mouth and a scarab heart on his chest. All these details are made of gold. This was reported by The Frontiersin.

It is said that the child died about 2,300 years ago. Because of the wealth of jewelry, the mummy was nicknamed the “golden boy”.

As you know, the ancient Egyptians believed that precious things help the deceased to move to the other world.

At the same time, almost all of the child’s organs were removed, and the brain was replaced with resin.

The heart is left in place. It was an important spiritual symbol for the ancient Egyptians.

The body itself is wrapped in fern leaves. According to scientists, at the time of death, the boy was about 14-15 years old. He has healthy teeth and bones with no signs of malnutrition or disease.

The height of the teenager is 128 centimeters. He has an oval face with a small nose and a narrow chin.

“The sandals may have been intended for the man to get out of the coffin. According to the ritual of the Egyptian Book of the Dead, the deceased had to wear white shoes to be holy and clean before reciting his poem,” said the professor of medicine that Kai University, Dr. Sahar Salim.

According to him, the golden talisman in the form of a tongue in the child’s mouth will help him speak in the afterlife.

“Another, like the knot of Isis (the goddess of fertility and motherhood), means that she will protect her body. In the form of falcons and ostrich feathers, they represent the spiritual and material aspects of life . A two-fingered amulet in the form of the index and middle fingers of the right hand was found on the lower body to protect the embalming incision, and the golden scarab beetle was thought to aid the cruel underworld.”

Skeleton of the golden boy

Recall that earlier researchers from the National Museum in Warsaw found that the 2000-year-old Egyptian mummy, which was once considered pregnant, did not have a fetus in the pelvis, but four bundles placed there by ancient embalmers.

Scientists have named a new reason for the creation of mummies