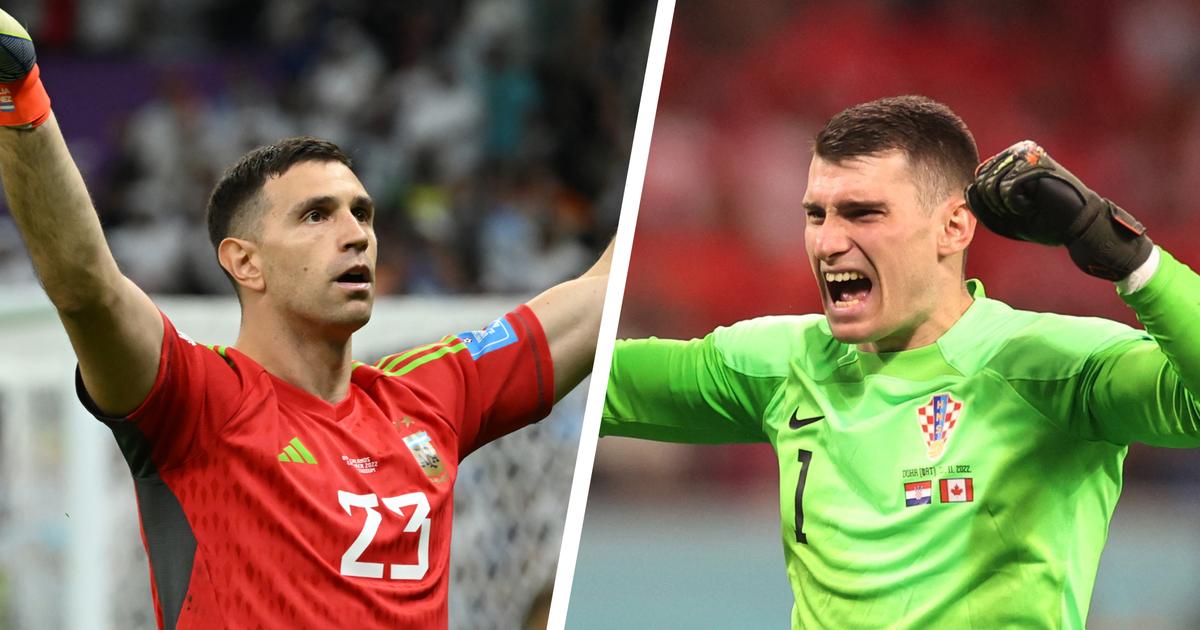 Argentina vs. Croatia, Lionel Messi vs. Luka Modric… but also Emiliano Martinez vs. Dominik Livakovic. The two goalkeepers, who have shone since the start of the competition, will fight from distance and play a crucial role for their team in the first semi-final of this World Cup.

“If you want to be an important football player, you can also be a goalkeeper”, once launched by legend Gianluigi Buffon. This sentence has never resonated so well in our minds since we saw the remarkable performances of the Argentine and Croatian goalkeepers.

Martinez: Disclosure, or rather confirmation

Not only does Argentina have Messi in their team, they can also count on the excellent goalkeeper Emiliano Martinez. And Pulga knows it, the one who preferred to run towards his team-mate to thank him rather than go towards the crucial marksman Lautaro Martinez during the Albiceleste’s qualifier.

Lionel Messi came to congratulate his goalkeeper Emiliano Martinez for the crucial save. PAUL CHILDS / PANORAMIC

The Argentinian goalkeeper had a bad experience at the difficult start of the World Cup for his team (2-1 loss against Saudi Arabia). “After the match against Saudi Arabia, I suffered a lot. I talked to a psychologist, because there were two shots, I couldn’t stop one. I have 45 million Argentines behind me and I should have done more.” he had opened the press.

Against the Netherlands, Emiliano Martinez woke up and quickly reassured Messi and his family, stopping Holland’s first two shots in the opening Test. Two parades, which were enough for Argentina to continue the adventure in Qatar. Argentinian defender German Pecella did not make a mistake in the mixed zone. “We owe him a big candle, we know we’ve warmed up.” Before these miraculous feats in the quarter-finals, the 30-year-old goalkeeper had also shown heroics against Australia in the eighth, making a saving save at the very end of the game in front of youngster Garang Kuol.

After nearly ten years at Arsenal, he is now an undisputed starter at Aston Villa, a club he joined two years ago for a €21.5 million cheque. As for selection, it was only on 29 and June 2021 that he defended his country’s colors for the first time. Unlike Livakovic, he has this famous “grinta” among Argentines, especially after the start of the World Cup.

Livakovic, the rise of power

Croatia has found its title-winning goalkeeper Dominik Livakovic more than ever. The latter earned his place in the Croatian cages in the middle of 2019, leaving Atletico Madrid goalkeeper Ivo Grbic on the bench. Therefore, the next generation of 2018 epic grandmaster Daniel Subasic has undoubtedly been found for coach Zlatko Dalic, who further noted that Livakovic “was tied with Subashichi“Recently.

What’s more, the 27-year-old is following in the footsteps of the former Monaco keeper as he achieved the same feat as him, stopping three shots on goal in the penalty shootout at the World Cup. It was against Japan in the 1/8 finals. Only two other goalkeepers have already done it, Ricardo with Portugal in 2006, and Subasic in 2018. The goalkeeper of Dinamo Zagreb impresses beyond his level with his measured and calm character. “I have a lot of confidence in him, he gives confidence to others– assured Zlatko Dalic after the match against Japan, before the main stakeholder spoke. “I tried my best and got a little lucky– was shown by the modest and soothing doorman.

Against Brazil, Croatia’s savior donned his hero’s mantle again, multiplying his tally (16) in regulation time before stepping up in another penalty shoot-out. Marquinhos, having failed in his attempt, must still be living the nightmares of Dominik Livakovic, who first stopped Rodrigo’s signature penalty. Field specialist Dominik Livakovic will be in Bayern Munich’s sights to replace Manuel Neuer, who will be unavailable until the end of the season.

If the two nations continue this semi-final to the penalty shootout, the shooters will know what to expect from these two goalkeepers. Emiliano Martinez or Dominik Livakovic, who will win this long fight? Answer on Tuesday evening at 20:00 in the Argentina-Croatia match.

Previous article
Argentina-Croatia. Albiceleste relies on his “grinta”.
Next article
Dorofeeva tells what position she had before a massive war

The Little Mermaid, Beauty and the Beast, Frozen and more: discover...

Russian dictator Vladimir Putin, after the start of a full-scale invasion of Ukraine, promised the Israeli authorities that he would not kill Ukrainian President Vladimir Zelensky Former Israeli Prime Minister Naftali Bennett flew to Moscow on March 5, where...

Details of Russia’s strike on Kharkov have emerged

Donetsk region continues to be subjected to Russian shelling. On the night of February 5, the enemy launched two missile attacks on Druzhkovka. Five people were injured, four high-rise buildings and a kindergarten were damaged. Vuhledar and...
Buna Time