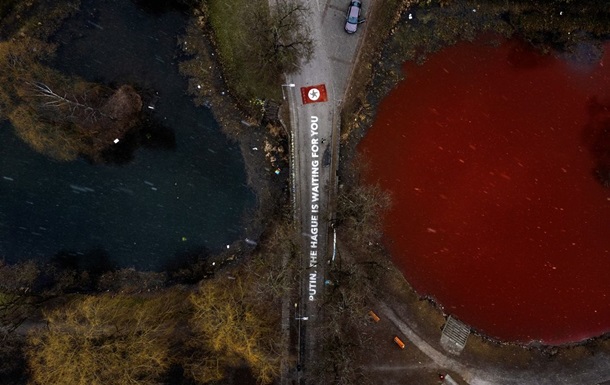 The purpose of the presentation was to call for action in support of the Ukrainian citizens, who are faced with genocide organized by Russia.

In Lithuania, local artists painted a red lake near the Russian embassy in Vilnius. They called their performance Swimming. It is dedicated to the support of the Ukrainian people, Berta Tilmantaite, one of the initiators of the project, said on Instagram.

“This is a call to action in support of the Ukrainian citizens facing the genocide organized by Russia. It is a call not to remain neutral in the face of war. A call to take an active part in protecting life, freedom and democracy of Ukrainian people being tortured, raped and killed by Russia, ”he wrote.

According to Tilmantaite, it is important not to be numb to the horrific images of the massacres of Ukrainians and their illness. The seemingly endless horrors that Russia has imposed on Ukrainian soil should not be the norm.

“Because countries like Germany are not moving forward and imposing adequate sanctions against the aggressor, preferring money, it is difficult for people to maintain hope. Therefore, we need to continue to act – spread the truth, volunteer, protest, donate and pressure our governments to act, ”he added.

It was noted that the “bloody” pond emphasizes Russia’s responsibility for committing war crimes against Ukrainians, and the swim of Lithuanian Olympic champion Ruta Meilyutyte symbolizes the need for continued efforts to fight .

Posted by Berta Til (@bertatil)

The authors of the project stressed that the reservoir is painted with ecological paint, which is not harmful to the environment and is widely used in biological scientific research.

Recall that Hollywood director Cary Fukunaga flew to Ukraine a few days ago as a volunteer. He visited Bucha, Irpin and a bomb shelter in Kyiv.

Playboy Ukraine has dedicated a new issue to the war