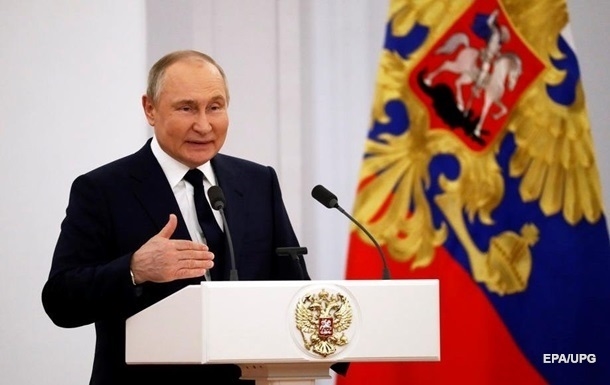 The Kremlin leader claims that in the territories of Ukraine occupied by Russia, the same people are said to be living with Russians.

Russian President Vladimir Putin made a new explanation for why he tried to annex parts of Ukraine’s territories. The head of the ruling regime of the Russian Federation said this at a meeting with the participants of the congress of young scientists on Thursday, December 1.

“I think it is becoming clear to everyone present here why we supported and later agreed to the recognition and accession of Donetsk, Luhansk and then two other territories to the Russian Federation,” he said.

The Kremlin leader avoided mentioning the Kharkiv region, where before its liberation from the Russians, it was also planned to hold a so-called “referendum” for further annexation.

In addition, he did not mention that the Armed Forces of Ukraine drove out the Russian invaders from the right bank part of the Kherson region, which allegedly “became” part of the Russian Federation.

“Look at the girls. How does (meeting participant – ed.) Fedorova, who lives in the Republic of Luhansk, differ from the same Fedorov somewhere in Novosibirsk, St. Petersburg or Moscow? Nothing. Someone, “said Putin.

Recall that in April, Putin claimed that the “tragedy” in Donbas forced Russia to start a war against Ukraine.

However, already in September, the head of the Kremlin found a new reason for military aggression: there is an “anti-Russian enclave” in Ukraine.